Who were the four Georges – the kings who gave their name to an age?

In 1714, George Ludwig, Elector of Hanover was crowned as the new king of England. He established a line of monarchs who ruled for the next 116 years, overseeing the transformation of Britain into an imperial power and an industrial nation.

Each king had individual strengths and weaknesses as men, and as rulers, and all shared a dysfunctional Georgian family trait of loathing their fathers.

We have the Georgians to thank for many aspects of ‘Britishness’, including the first Indian curry house (1810) and the national anthem! 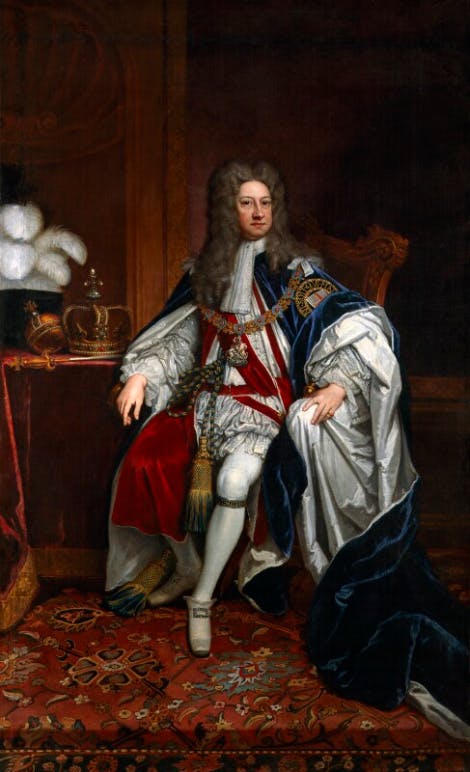 The Hanoverians are here!

In 1714 Great Britain acquired a new king, Georg Ludwig, Elector of Hanover, who was transformed into King George I. A direct succession to the throne has continued since that day.

Britain’s previous monarch Queen Anne (1702-14) died without an heir. George did not have the closest blood ties to his distant Stuart cousins, but most importantly, he was Protestant.

Parliament had decreed that the monarch could only be Anglican, so 57 Catholic claimants were passed over to offer Georg Ludwig the British crown.

The King had divorced his German wife Sophia Dorothea for adultery in 1694, so he had no queen to rule alongside him. Instead he brought to England two extraordinary-looking women.

His curvaceous half-sister Sophia Charlotte was nicknamed ‘The Elephant’; while his bony mistress Melusine was tagged ‘The Maypole’. 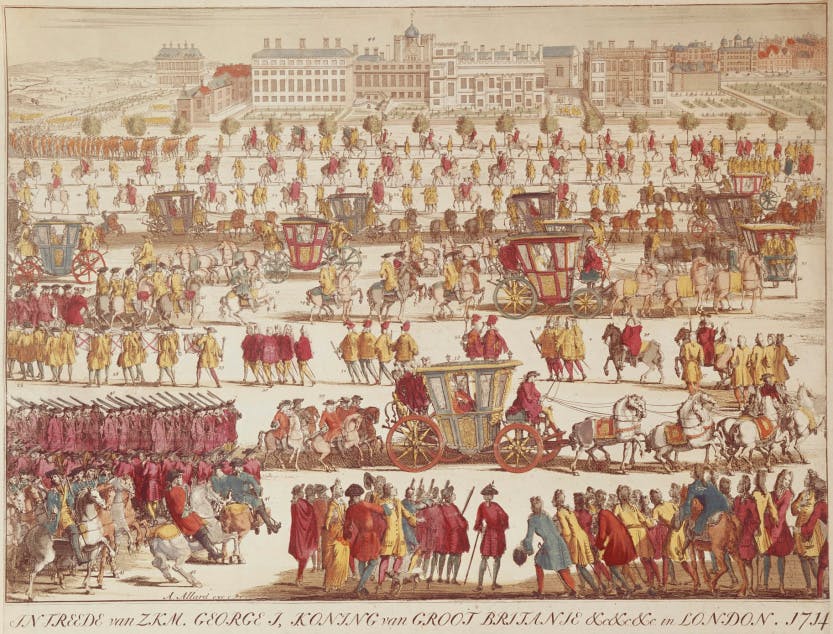 George was not thrilled to be king, and among his subjects and courtiers the feeling was mutual. When he arrived in Britain, the cheers quickly turned to jeers and he was variously insulted as ‘corpulent oaf’, King Log and most bizarrely, a turnip!

The King’s frequent and prolonged trips home to Hanover didn’t go down well, either. At court, George angered bigoted members of English aristocracy by granting his loyal Turkish servants, Mehmet and Mustapha, the top jobs.

Image: State Entry of George I and the Prince of Wales into London, 1714, Royal Collection Trust / © HM Queen Elizabeth II 2017. 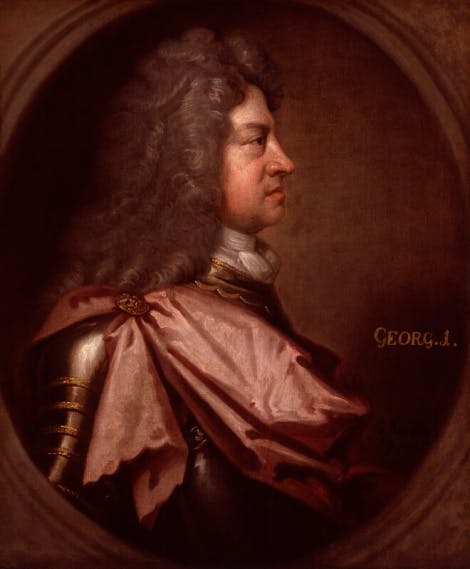 ‘In private life he would have been called an honest blockhead...’

What type of ruler?

Reluctant, but willing to delegate. The King’s trust in his government allowed men like Robert Walpole, his first minister, to run the country very well.

George I’s reign saw the Jacobite rising of 1715 and the first stock market crash. Yet the King’s common sense and the good judgement of those around him helped the country weather these storms.

George I died from a stroke supposedly brought on by an excess of strawberries, on his way to Hanover.

George I employed the architect Vanbrugh to make a series of improvements at Hampton Court Palace. These included the creation of rooms for the Prince of Wales, later George II, and Princess of Wales.

The King also converted the Great Hall into a theatre and built a new ‘Georgian Kitchen and laundry at the palace in 1717, today known as the Georgian House (detail).

The King frequently resided at Kensington Palace as well and had the core of the old palace rebuilt to create an impressive series of state rooms, decorated in flamboyant style by rising star architect William Kent.

The fabulous wall and ceiling paintings can still be seen today. They include the King’s Staircase, which features members of George I’s court. 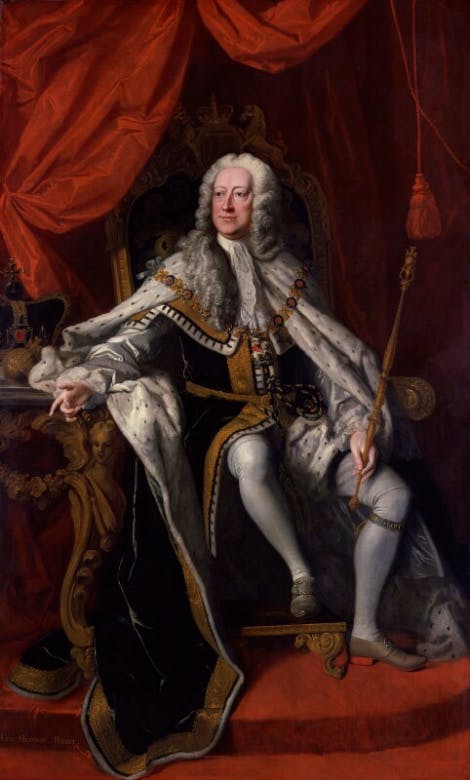 The second George was praised for his courage and vigour – he was the last British monarch to lead his troops into battle. Out of uniform, however, he was dull and self-important, and quick to anger. On occasion, he would tear off his wig and kick it around the room!

At heart, the King was probably deeply insecure. While still a young boy growing up in Hanover, his mother Sophia was locked away for committing adultery and he never saw her again.

As a man George found refuge in an obsession with facts and figures. The King would spend long hours describing obscure details of military uniforms and battles to long-suffering courtiers.

According to one account, George II even had his underwear numbered according to days of the week!

By contrast, his wife Queen Caroline (and his longest serving mistress Henrietta Howard) were among the most accomplished and intellectual women in Europe. 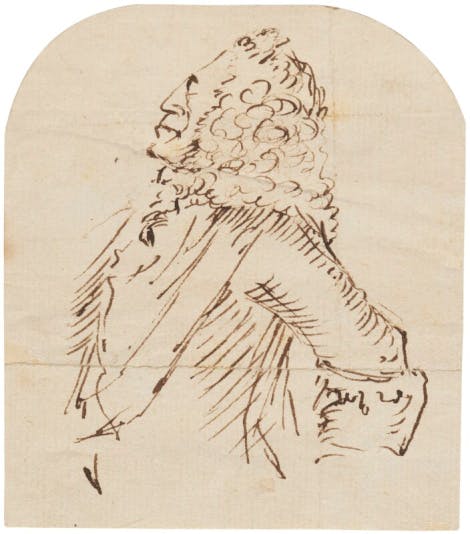 ‘Little things … afflicted him more than great ones.’ 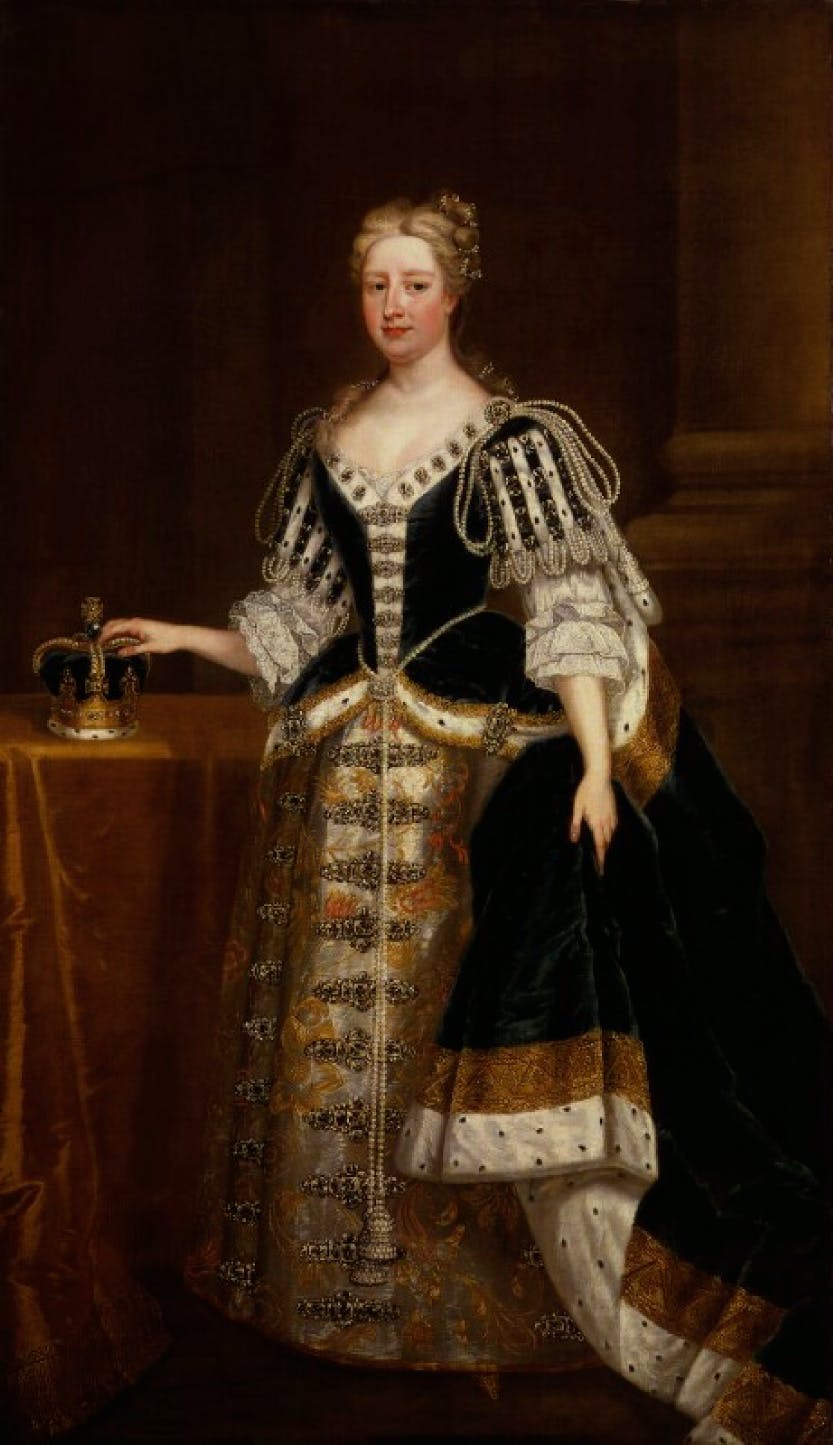 Caroline of Ansbach (r1727-37) was brought up at the sophisticated, highly-cultured courts of Berlin and Dresden.

As Queen Caroline, she invited writers, philosophers and scientists to her intellectual salons at Kensington Palace.

She also brought much-needed glamour and liveliness to court.

Although George II and Caroline were very different, theirs was a successful marriage, with a bond of trust between them.

Caroline acted as regent on several occasions while George was in Hanover. Caroline also played a pivotal role in court politics.

Apart from her dreadful relationship with her eldest son Frederick, she ensured that her family were nurtured and well educated.

Forward-thinking Queen Caroline also had all the royal children inoculated against smallpox. 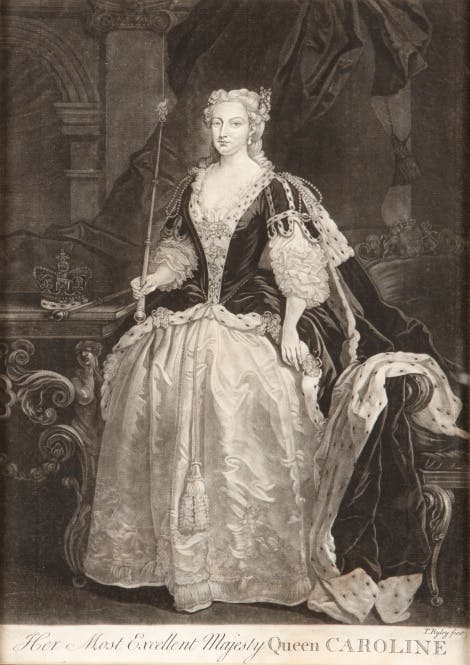 ‘There he goes, that wretch, that villain! I wish the ground would open this moment and sink the monster to the lowest hole in hell.’

The key to understanding the Georgian royal family is that eldest sons loathed their powerful fathers, and were loathed in return.

The relationship between George II and Caroline, and their eldest son Frederick was particularly bad. The King and Queen openly preferred their second son William Augustus, the Duke of Cumberland.

William Augustus, spoiled as a child, grew up to be a monstrously cruel military commander.

George II and Queen Caroline used Hampton Court Place frequently after their accession in 1727, particularly during the summer when the palace was alive with bickering, scheming and flirting courtiers.

Despite loathing George I, his son and daughter-in-law enjoyed the luxurious apartments he built for them. This is the Queen’s State Bedchamber, with the magnificent state bed made for them in 1716.  The mannequins represent the splendidly dressed King and Queen.

For the first ten years of George and Caroline's reign, Kensington Palace was a glittering centre of court life, where courtiers, politicians and rising stars vied for favour. With the help of the gardener Charles Bridgeman and designer William Kent, Caroline also transformed the gardens at Kensington with the formal gardens swept away in favour of a more ‘natural’ look. 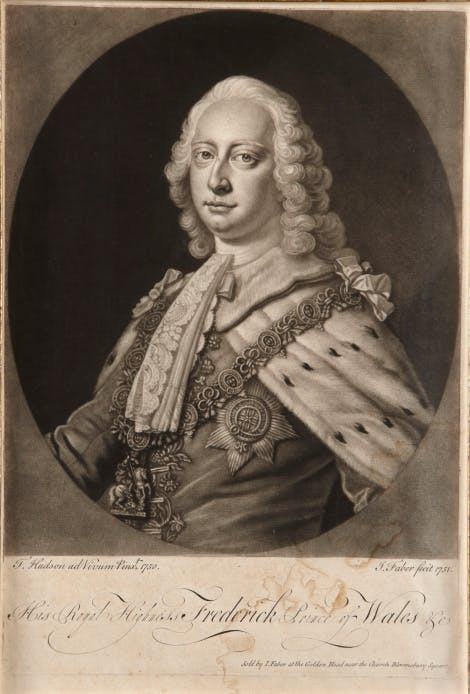 Frederick was the eldest son of George II and Queen Caroline, and father of the future George III. He was brought up in Hanover until the age of 21. Poor Fred was loathed by his parents, and his younger sisters and brothers, who were born in England. The feeling was mutual.

Frederick suspected his parents were making sneaky plans to give the throne to their second, favoured son, William Augustus.

The strained relationship came to a head in 1737 when Frederick’s wife, Princess Augusta, went into labour in the middle of the night at Hampton Court. The whole family had gathered to witness the birth.

To spite his parents, Frederick bundled the queen into a carriage to drive the 16 bumpy miles to London. His excuse? That St James’s Palace was the ‘traditional’ birthplace of English monarchs. 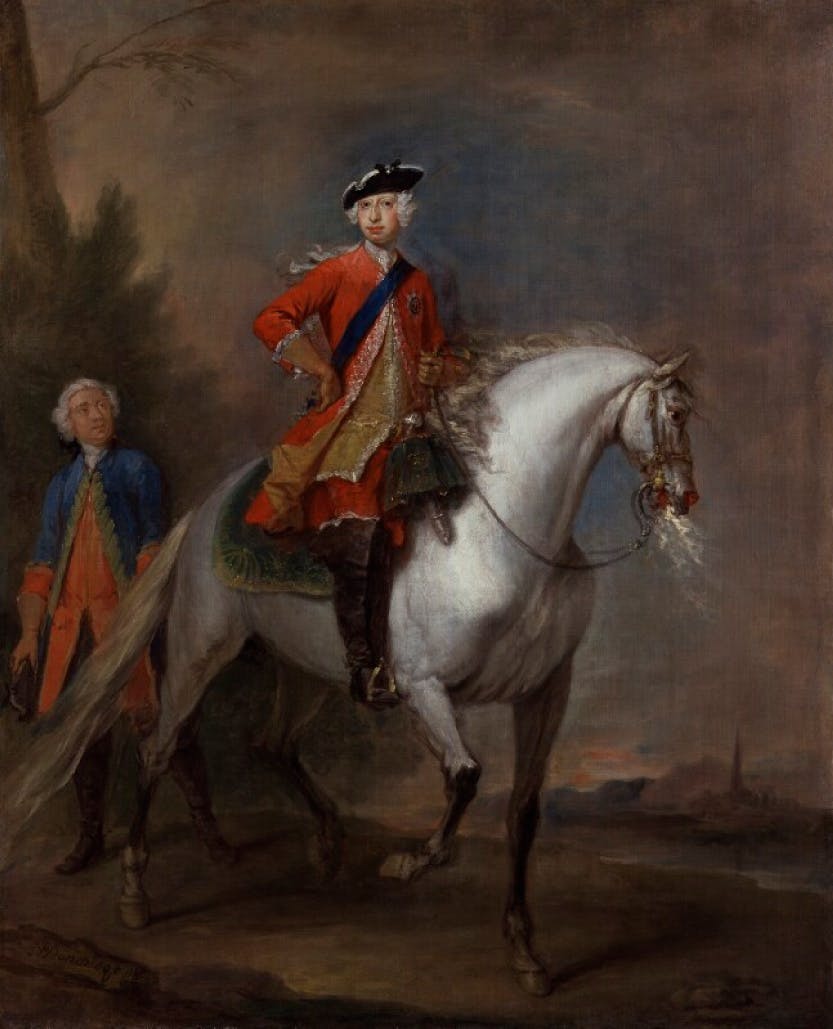 Frederick and Augusta were then ‘banished’ to Kew Palace, where Frederick built the Royal Kitchens around 1730 and the clever and talented Princess Augusta established the great garden of Kew.

Frederick died suddenly in 1751 aged 44 from a burst abscess in his chest, possibly cause by a blow from either a tennis or cricket ball. 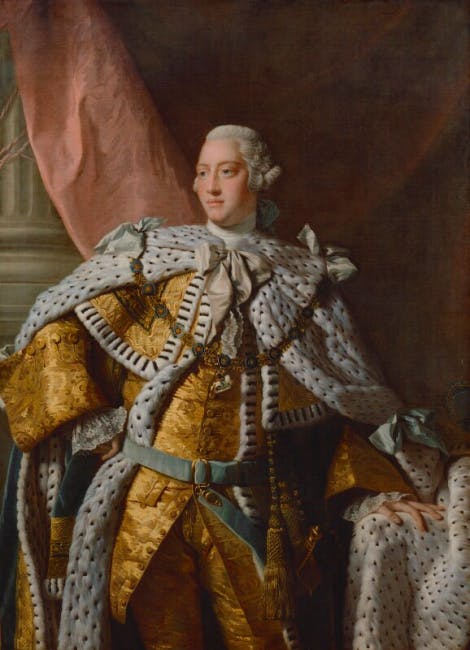 Prince George became heir to the throne when his father Frederick died in 1751. George III was a cultured, well-intentioned king. Sadly, his worsening mental illness cast a huge shadow over his later life, and that of his family’s.

The King had many interests—agriculture, the arts and sciences, music and manufacturing.

However, he was also over-controlling, reluctant to let either his children or the countries under his rule develop independently. This caused problems with his sons and daughters and contributed to Britain losing the 13 North American colonies in 1783.

He and his wife Queen Charlotte had 15 children, including the future George IV. 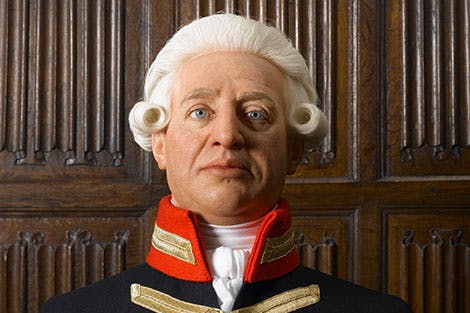 ‘Born and educated in this country, I glory in the name of Briton.’ 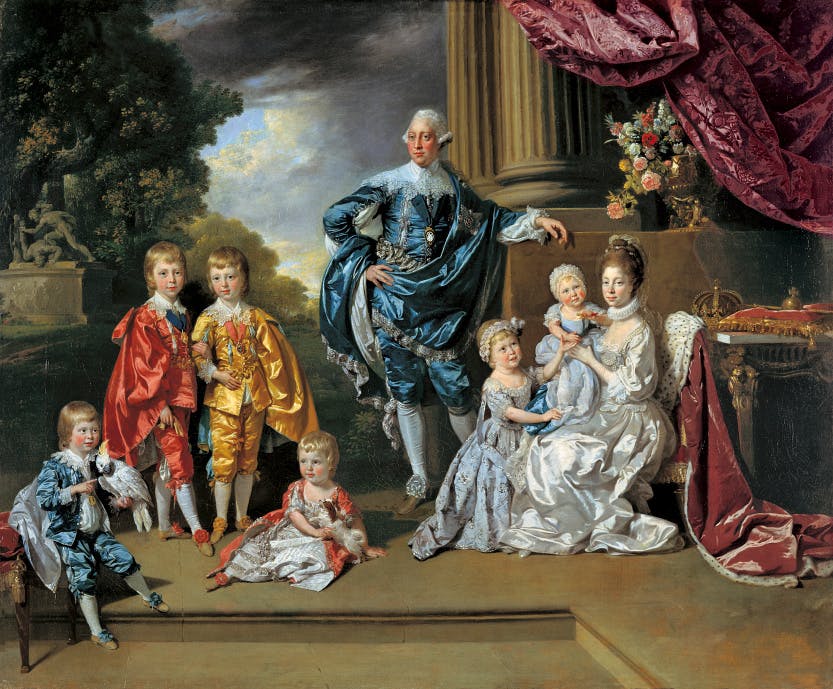 The King in decline

The King suffered the first bout of mental illness in 1788, and recovered, but suffered increasingly severe episodes in 1801 and 1804.

His son, the future George IV, was installed as regent in 1811, by which time the King was almost blind, and demented.

George detested Kensington Palace, which reminded him of his great-grandfather George I. His preferred palaces included Kew, where some of his large family spent many happy summers. However, the King’s affection for the palace was overshadowed by his incarceration there during his periods of madness in 1788, 1801 and 1804.

As Prince of Wales, the future George III was lodged in Kew Palace, by his parent Prince Frederick and Princess Augusta.  The little palace was known as the Schoolhouse, as Prince George and his younger brother Edward were formally educated there.  It was, however, luxuriously furnished for the use of the two young princes.

One of Prince George's most influential tutors was architect William Chambers, who built the Great Pagoda in Kew Gardens in 1762, one of George’s favourite buildings.

Image: The Great Pagoda in the Royal Botanical Gardens, Kew. 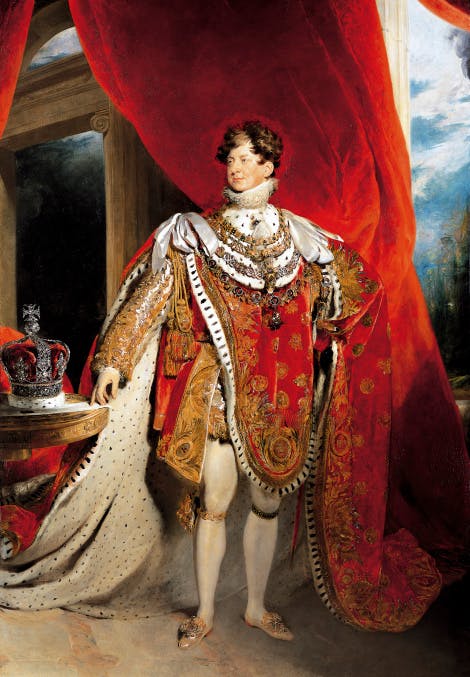 This extravagant monarch was spoiled and profligate—his coronation banquet alone cost £25,000 (when a family could survive on £30 a year). He however had impeccable taste in art and beautiful objects.

The fourth George had to wait a long time to come to power. Like a ‘golden apple’ he was attractive and promising at first, but by the time destiny finally called, he had grown old, lazy and rotten.

George IV's messy romantic life resulted in huge complications.  Under pressure to produce a legitimate heir, he wed his cousin Caroline of Brunswick. The couple soon parted, but not before the union had produced an heir, Princess Charlotte.

Sadly Charlotte died in 1817 after being delivered of a stillborn son, robbing the country of two generations of heirs at a stroke. Her father was so upset that he was ill in bed for weeks afterwards.

Too large for life

In later life, vain George tried to disguise his expanding girth by pulling in his gut with a belt, and buttoning his excess flesh into tight fitting uniform jackets.

He also hid his several double chins with a ‘large, black neckcloth, and then swelling out his shoulders and the upper part of his person with tags and embroidery…’, topped off with lots of medals, and a wig!

Inevitably, George IV’s over-indulgence caused him health problems, made worse by his liking for drink. This caused gout, hardening of the arteries and eventually the tumours that probably killed him.

Towards the end of his life, George IV was taking vast quantities of laudanum and opium to relieve the pain. 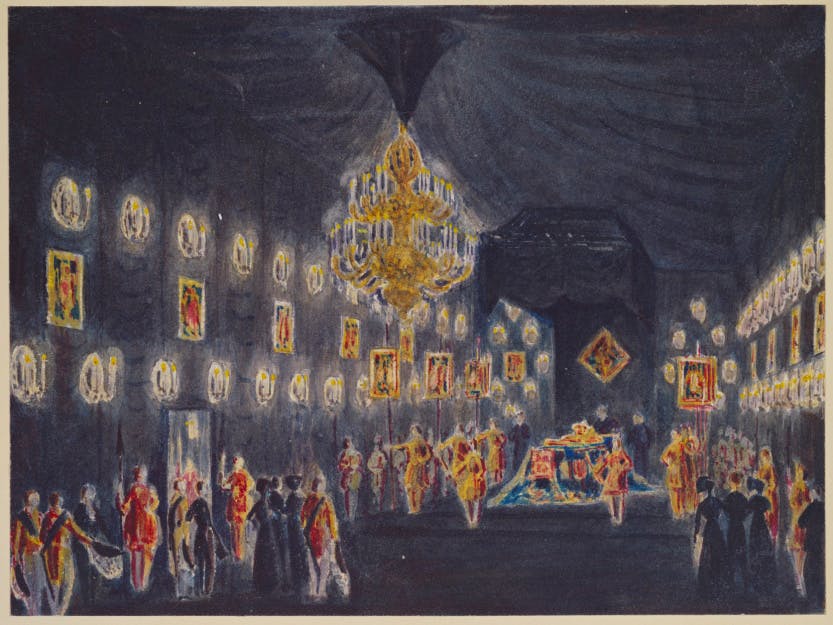 The end of the Georgians

Feeling the end was near, he asked that the curtains around his bed be drawn back so that he could see the approaching dawn.

To his doctor he whispered ‘My dear boy, so this is death’.

And so the Georgian age ended.

Explore the beautiful private rooms at Kensington Palace where Mary II once took her meals, relaxed and entertained. 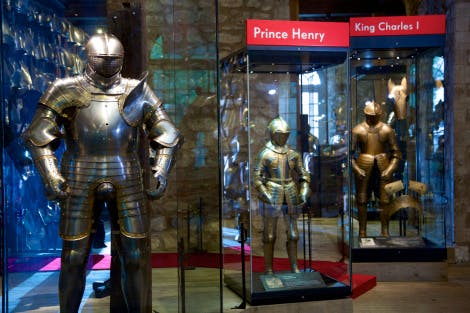 Marvel at the historic armour of Henry VIII, Charles I and James II in the Line of Kings at the White Tower.

Walk in the footsteps of royalty in the beautiful Kensington Palace gardens.

Feast your eyes on our wonderful selection of food inspired by our royal kitchen. Shop chocolates, preserves, jam, chocolate coins and the finest liqueurs.